Mamo does dad stuff, gen 7 moves out (gasp!), and all the kids are artists.

Forgive me for the sporadic comments sprinkled throughout. I was having too much fun playing and wasn’t concerned with photos (also having more than 8 sims in a house is HARD WORK).

Now, where were we? Ah, yes. Three and a half kids in the house. Mamoru’s aspiration calls to have quality bonding time with his children and read lots of books. The kids certainly don’t mind. 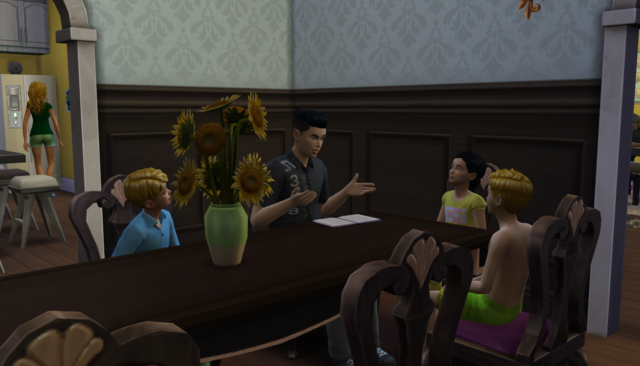 Looks like he’ll be reading a lot more in his future. Another little girl, Momoko! (I really like that name, FYI.) 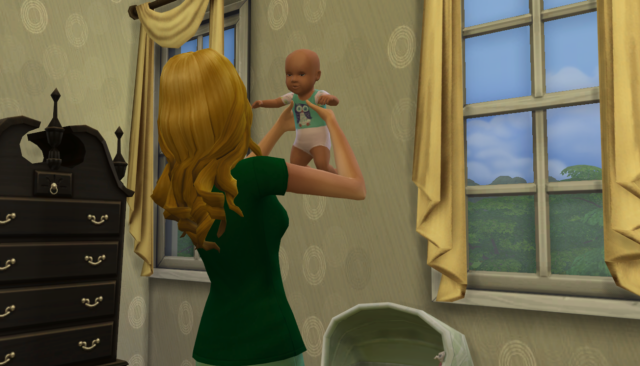 Having Maddox around for so long has been super helpful with problems around the house.

Nade’s cooking skills have been great, too! Here she is making a cake for Sora’s birthday.

Oh, little Asami aged up with a very interesting hair color. She earned the trait bookworm. She, like the majority of her siblings, rolled artistic prodigy. We had to add two more drawing tables in the art studio to accommodate!

He stepped up to his confetti cake…

Looks like we’ve got a beach boy in the house! He rolled loner and an aspiration of bodybuilder.

A good way to start that aspiration is to eat cake, of course!

Sora and the rest of the kids are lucky that their grandparents have been around for so long. Maddox and Sora became best friends, even! So, I caved and moved out Aya, Maddox, and Nade to a beautiful house in Oasis Springs. They were getting in the way and, with the larger household mod, you can’t go and edit outfits/appearances because the game could crash. SO, rather than risk it, I made this change. I’ll check on them soon because I don’t want them dying on me…

Momoko aged up after that and rolled the creative trait and, surprise, artistic prodigy.

I think within the same day it was time for Kaori’s birthday. Oh my GOODNESS, Kaori, you are so cute! I am seriously in awe of her adorableness. 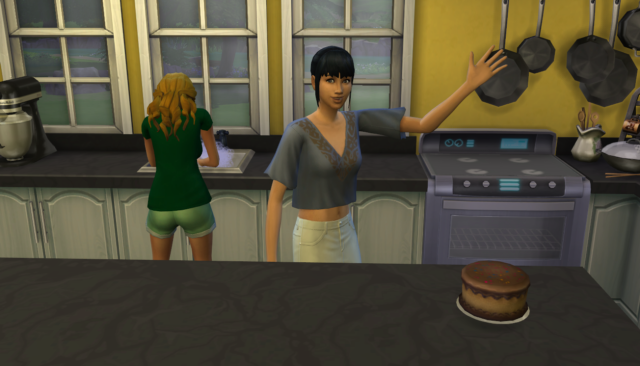 For her second trait she rolled music lover childish and her aspiration was musical genius (or whatever it’s called. You’d think I’d have them memorized by now but you’d be wrong. 😛 )

Off topic, I was redoing the counters because a mod update (or something) moved all of my clutter away (grrr) and I noticed the mug designs. I thought maybe it was a clue left for the GTW pack! However, on second inspection, this heart here is split side to side and the hospital logo is split top to bottom. Still, I was pretty surprised!

Back on topic, Aunt Masumi came over for a visit and got her groove on! It’s nice to see that she hasn’t changed much. (Oh, but just wait until you see the mom makeover I gave her!)