Last time I mentioned my guy…

…but now I should mention Kyo’s. Yes, you heard me correctly: mean Kyo has a boyfriend now.

I never really brought it up before, it but she was really boy crazy when we were still in high school. It was like she dated a new guy every semester. Finally, though, she seemed to settle on one that was to her liking. His name is Jakob and he is too good for her!

You know how they say opposites attract? Well, he’s the sweetest guy I’ve ever met and that includes my dad. I mean, he truly is a saint because she’s the worst.

I do wish him luck, though, because she’s been a lot nicer since he’s been around. I’d like for them to keep up whatever relationship they’ve got going on…

Our little sister, Eri, is not so little anymore… Since starting high school she’s become a firecracker. Her behavior’s been a bit erratic and my mom says that’s likely because of hormones. I don’t know about that… 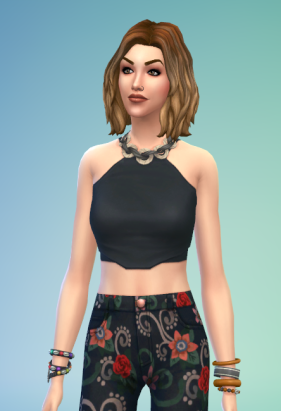 I’m bringing it up because she’s got a sort of friend that is a boy, too. His name is Jude and he’s also a sweetie (we Ikeda girls just attract ’em, what can I say?) He’s still in the scouts program and he’s told me he does it because he enjoys it (and it’ll look good on his college applications).

There’s nothing really going on between them yet but I can tell there’s something beneath the surface.

Poor Eri, though. They’re both dropping hints left and right but neither has decided to take the initiative and make a move. Last night after he left our house I caught a glimpse of her crying. Poor thing. I should probably talk to her… AN: Here are some bonus shots of Eri I didn’t get to use. I just couldn’t make them fit.