Nade and Maddox get hitched and Kyo flirts with a wedding crasher.
Weddings are always awkward looking for this family so I wanted to do something about that. I placed a ton of new or updated venues from the gallery and Nade and Maddox chose to have their wedding at the Willow Creek Country Club.

It was a small ceremony with only a few relatives outside the immediate family in attendance. They invited more but they didn’t come for some reason. 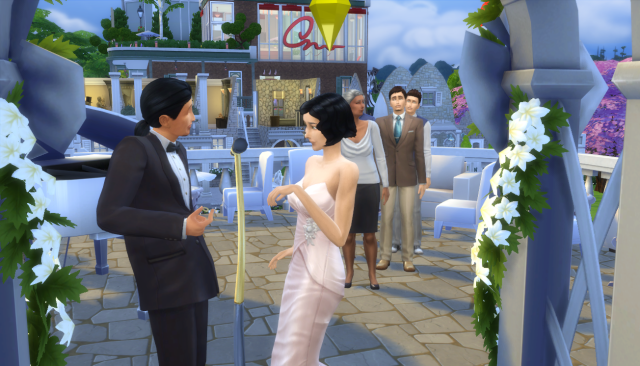 Nade made the cake earlier that morning.

Despite the cake being invisible, this was a cute picture.

They hired a caterer (that did nothing), a musician (that did alright), and a bartender (that kept the guests busy during the ceremony instead of watching it).

After the ceremony, Kyo met a cute girl named Hillary and they talked quite a bit. I was really hoping they’d hit it off. Kyo invited her to come out with the young folks to the newly renovated Blue Velvet but she backed out at the last minute…

All in all it was a nice wedding and the Ikeda family added a new member! Hooray!