We check on the rest of the extended family, Ryu inspires Maggie, and we meet our first set of triplets.

Instead of playing late Sunday evening, I spent some time organizing my town and moving people around to different households. The Ikeda relatives have moved into three households. I don’t think I’ll expand upon the cousins’ families anymore. There are just so many of them. (A message from the future: HA HA HA…)

I also took the leftover townies (there weren’t many) and made them all children so they could be friends with Tachi, his sibling(s), and their cousins. Love that full edit cheat…

Oh, and Maggie finished her big family aspiration with a grandson, Cortez, born to Toya and his wife, Hailee. Yesssss!

Here’s a list of the Gen 5 siblings currently (and Melisa for good measure. Oh, and Kaida’s girls, too.)

Ryu pops by every other night or so and checks in on Maggie. I don’t even think she noticed that he was nearby this particular night but I really like how he just stayed by her. Hate to tell you this, but she finally received her final days notice. She’s currently at 121 days and has a little space left but I’m sure it’ll surprise me when her time comes…

The next morning Maggie autonomously went to the piano and started to play. I like to think she felt inspired by Ryu without realizing it… That’s my head canon at least.

I wish that kids could just keep drawing instead of having to put their drawings in inventory. It really slows me down and I lose track of what they’re up to. As Tachi’s still a C student, I figure having him learn as many skills as possible is a good thing. He needs it.

As he’s also a Whiz Kid, he needs some quality time reading with an adult. Adriel gave Tachi the best look before he started. He’s just like “the things I do for ya, kid…” 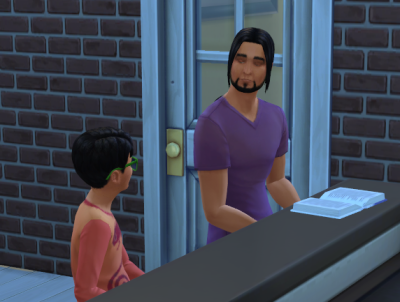 Later on, something made Adriel pretty angry. So angry, in fact, he wanted to paint an angry picture. It took me a while to catch him angry again as he walked around because the emotions in each room were making him happy or confident… When I finally got him settled, though, the picture he drew was a little unsettling…

Tachi, on the other hand, wasn’t feeling too hot, either. I don’t know what got him all fired up. Obviously school but beyond that it beats me.

Sakura popped on over later and the three ladies had some coffee together. How sweet. (Off topic, I don’t care for the painter track outfit. Just saying…) I really like that they all just sort of congregated.

Later I also noticed that Michiru and Maggie were chatting and then I saw this crown. I’ve never noticed it before! It’s from Maggie’s Matriarch trait. It increases skill of her family when they’re around each other. Neat!

That evening Michiru went into labor! I sent them off to the hospital and they came home with another little boy. They named him Hiro. (No, I did not just search tumblr for Big Hero 6 and sort of become obsessed, why do you ask? / Message from the future: 8 months later and I FINALLY saw the movie.) I was looking forward to seeing Tachi’s reaction but he didn’t give me a response despite the “meet new sibling” option appearing in his queue. I guess he’s fine with a new brother?

More time passed in their world than I originally thought because, as I was editing this post I thought, oh, I should check on Elisabeth and her new child! I had Michiru go for a walk to visit her little sister and before she traveled, I saw she had a daughter named Colleen. Perfect! We’ll go say hello. She got there and met Colleen. Great! I panned upstairs to look for Elisabeth and when I came back down Colleen was hugging one kid and then ANOTHER. Who were these children?
Surely Elisabeth didn’t have my game’s first set of triplets?
SHE DID.
THEY WERE ALL THREE MICHIRU’S NIECES AND NEPHEW.
That was fun to discover, got to admit.
—————————————————
And now for an author’s note!
I meant to type this post up during my lunch break at work so I could post it like I had been doing this week but I was super busy today and had a working lunch. I’m not important enough to call it a working lunch, really, but I basically ate and then popped around the internet for a few minutes in between typing things and trying to catch up. I was really excited to have posted at the same time every day for a whole week and then I messed up. Oh well. At least this post is up within the same day. I had all of my posts mostly written up until Wednesday and I just had to touch up from there. It’s a semi-busy weekend so cross your fingers that this week keeps up! Come to think of it, the next week is pretty busy, too. It’s another concert week and we’re providing the soundtrack for Gladiator as the movie plays – fun, yeah?!