Back in the world of Miss Eva, life is going well. The family seems to like having a bit more space in the house. It was needed, too, because it looks like Eva is expecting again! (If you want the link for the panda shirt let me know and I’ll post it – I got it from ModtheSims!) Bray actually decided to read a book for once. Shocking. I mean, I guess he can take the time to read while also on the toilet. Multitasking is grand. Ben went to his first day of school without a fuss. It doesn’t look like he had a very good time.

Being tense, he decided to play some Sims on the computer. That’s what I do after work, too, Ben. Later, Eva broke the good news of her pregnancy to Bray (while eating, of course). He was pleased that they’d be having another baby soon. It hasn’t been challenging to have two non-controlled sims in the house so I’ll see how bad it is with a third one. Eva was tired at this point so I sent her to bed. That gave me some time to spy on the boys.

Bray went to bother Ben. Sims do enjoy random hugs or kisses. I really like that (except when they stay to wait until you’re done gardening. Nothing stops them from gardening). Also, there’s no bed in Ben’s room because they can’t afford it quite yet. That’s the next purchase on their list. Eva will give up her bed if he’s tired. She’s such a good mom.

Ben really enjoys his clay. I really like to leave one around the house for them to play with and leave different pieces of art. 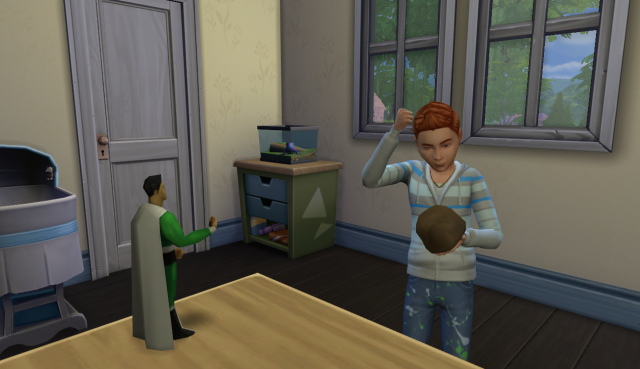 See what he made? A little…star…thing. Okaaaay.

You know, I’m really proud of Bray to branch off from just playing on the computer all day. Some tv time is appreciated (really, am I saying this?)

Although exhausted, Eva told Ben of the upcoming baby. He was excited about it. I mean, I’m surprised he didn’t figure it out from her belly.

Ah, yes! Something that happily surprised me. I was just randomly checking on things in the house and saw Ben and Bray talking. Ben looked really displeased and I didn’t get to see what he was being spoken to about. Then I noticed that he immediately went to the trash bin and took out the trash. I think Bray was telling him to do some chores! I guess it’s not something I should expect too much, though, because Ben didn’t seem bothered by all of the dishes around the house. You’re not even a slob, Ben. Get it together!

Eva is too tired to deal with this shit, boys.

I mean, you make all these messes and then you expect the pregnant lady to clean it all up.

Even the toilet. Gross, you guys.