Hello! It’s Eiji again. How did August do with his post? I hope he didn’t embarrass our family too much. Anyway, I’ve got somewhat of a wide-spanning update for you guys. August told me a basic idea of what he told you so let me fill in some of the blanks.

The weather has been really strange. You know, we’ve always had a sort of spring-ish sort of season but suddenly it got cooler and the plants all changed! I didn’t really know how to act. The plants weren’t really affected but some of them turned brown. I frantically called Frankie and he assured me everything was fine. He mentioned something about the Watcher and I shushed him. I don’t want to hear about that crap.

Anyway… You know that Angie has her ups and downs. I found some pictures in her room and it made me really sad.

I guess it’s good we got her that dragon doll…

It really helps perk her up.

Okay, so August and his girlfriend, Amira… They’re serious. I think they’ll probably stay together for the long haul. She seems to be a good match for him.

Anahi thinks they look cute together. (It’s true but I won’t say that out loud. Gotta keep up appearances, ya know?)

Eddie, on the other hand, is sort of hanging out with this girl, Shona. I think that’s her name. They’re sort of friends but I don’t think he’s had much luck in pursuing her, you know what I’m saying? August tells me poor Ed’s already been rejected once by her.

August sort of made it his mission to help Eddie find someone who won’t “friendzone” his twin. These plumheaded boys of mine… Anahi has told them there’s no such thing but they won’t listen to her.

I’m not gonna pretend to be a genius about relationships; you know I didn’t talk to girls when I was that age. I mean, at least no girls besides my sisters. Still, I know better than to believe in something so stupid…

The boys, on the other hand…

Despite our annoyance in their terminology, it looked like August might have found someone to give Eddie a try.

I think she’s a little too cool for him (th’ kid’s a nerd!) but August has confidence in his matchmaking skills. (AN: You’re a nerd, too, Eiji! Stop being so elitist!)

We’ll have to see. I just hope they don’t talk to her about the mysterious friendzone. That will be a one way ticket to Nopeville.

Angie and August have been playing a lot of chess together for Angie’s wish to be a Whiz Kid.

They’re pretty good together but then all of a sudden Angie will start to get on his case.

“NO, you plumhead! Why did you do that? That is LITERALLY the worst move you could have made! Do you want me to beat your butt?”

I don’t like to listen to their arguments. Lots of kid swearing goin’ on. They learned that from me; oops.

Back to me. I know August mentioned that we’re comin’ up on finishing our goals of the park.

Here’s the PROOF. WELL, minus the 8 perfect plants. We’re working on it but we’re ALMOST THERE. We are SO CLOSE…

Oh, and remember how I said that the weather has been nuts? We had snow. On my birthday.

That’s okay, though since it wasn’t freezing. I mean, why would we be outside in short sleeves? We’d be crazy…

Not bad, huh? Am I still cool? 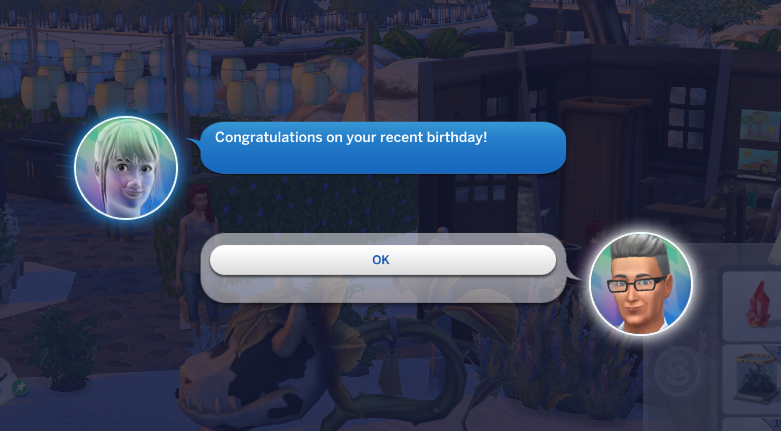 I celebrated by some fishing with the immortal Frankie, still kickin’. I think his potion must have worked!

One last thing… We had our first problem with Bingo. My idiot son took the cake bait.

Thankfully Bingo spit him out. I made August go to bed immediately since he looked pretty drained. Idiot.

BONUS: Look at Bob Pancakes! I’ve never seen him with gray hair before!!!