Dad’s been really busy tending the garden so I’ve been given the go ahead to give an update on how things are going on the park.

Guess I should introduce myself. I’m August, the older twin of me an’ Eddie. As you know I’ve now grown up and am a strapping teenager. I’m feelin’ mysterious so I’m not gonna tell you my new trait. Sorry not sorry.

So far it looks like I might be the one to continue on this quest. I mean, we’ll wait to see how Angie turns out but I have a feeling it’ll be me. So, get used to hearing my voice (even though Mom says I sound a lot like Dad anyway).

Last time you heard from us I decided that I was done with being a kid because my best-friend-that’s-not-my-brother came over to visit me and she was already a teenager! I REALLY didn’t want to miss anything so, as you know, Eddie and I caked up.

Me and Amira go way back. She was totally into me so I figured I might as well get things out in the open about our family and what we’re about. She was a little surprised that our family has always been really obsessed with carrying on our line. Like, normal families aren’t like this? Guess not. I was a little worried but, like I said, she was totally into me. We decided to date. Hey, what do we know? We’re just teenagers but it felt right to us, ya know? You know what else felt right to us? In other news, our cowplant finally grew up! Angie was given the task of naming the beast and she came up with this delight: Bingo. 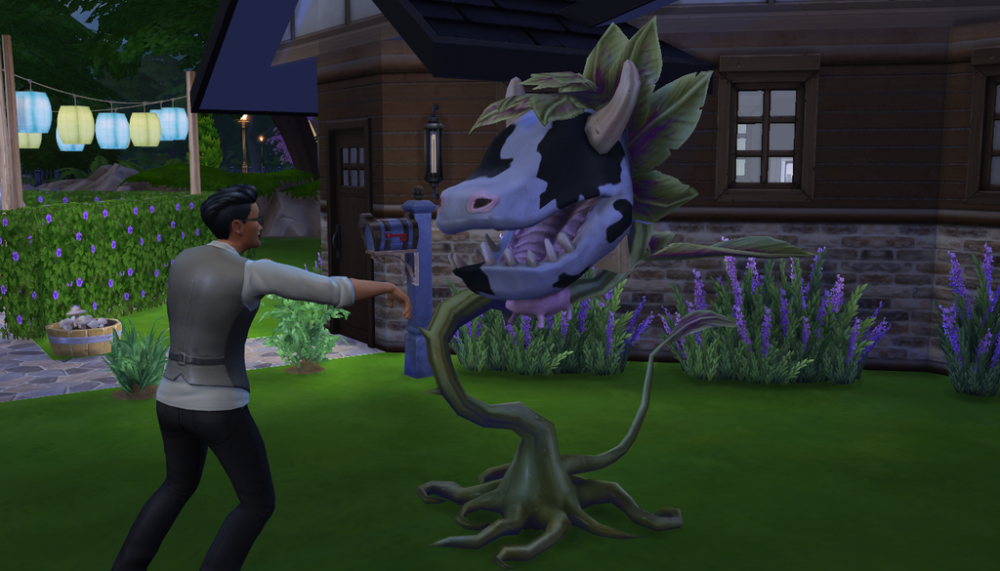 She’s a good girl, Bingo. She almost always lets us pet her and she hasn’t eaten a single visitor yet. Mom’s only a teeny bit worried. So, back at the start I mentioned that Dad was busy with the gardening. Well, now that Bingo is all grown up Dad thought that he was done. When he went to check on his requirements, though, he discovered that he needed at least eight perfect plants. I THOUGHT HE WAS THERE ALREADY AGES AGO! We were all wrong. So, now he’s scrambling to get those plants perfect. He’s got a lot more gray now… He won’t let me take his picture at the moment but I promise we’ll get one eventually.