Before we get started, Tatsuya has an announcement to make:

He made it into Love Shot: the Hella Good Bachelorette Challenge! 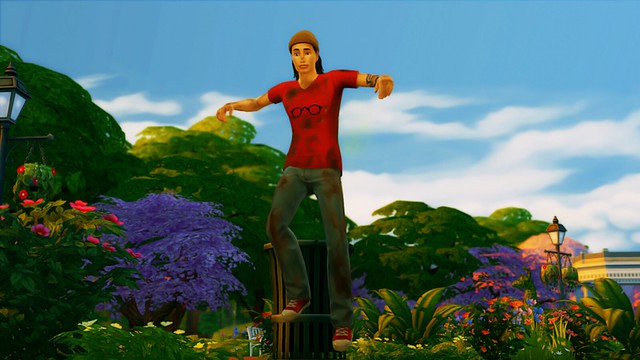 You can read his hilarious intro by SunnyShay here!

When the episodes start I’ll keep you linked up but you should follow her thread and/or blog so you don’t miss anything. 🙂

Back at the Legacy homestead, Sonia wanted to get all her children (or as many as she could at the time) together for a little “Family Fireside Fun”. Tatsuya hadn’t left for his show yet so he graced them with his presence. Sonia told them all an action adventure campfire story! They weren’t really impressed…

Yoshi had work but Tatsuya’s appearance makes up for his absence?

Kaori missed out on this bonding time; her reasoning was that she saw her mother all the time. Instead she spent some time training with her father (because she doesn’t see him all the time too?). This was especially smart, though, since right before this he received his final days notice. (Sonia did also. Double standard, Kai?)

I’d feel so bad to let them die when we’re so close to the end… Kaori just waited too long to have children? Maybe Mamoru and Sonia took too long instead! This is someone’s fault!

I’ll stop playing the blame game. Putting off death is what youth potions are for! They both took a drink.

Moving on to the future…

Kaori’s latest pregnancy had Paranoid Me all concerned..

What if she has another girl?

We’ll be fine, of course. We’ve got that larger household mod. We would try again.

BUT MEGAN, what if she has QUINTS? YOU HAVE THAT MOD, TOO!

That would be very inconvenient but we would CARRY ON.

Anyway… This pregnancy seemed to take longer than normal. I think the game just knew I really wanted to see a boy be born. Kai had several hobbies she took up her time with.

And the ever popular “wake up the sleeping baby to talk to her” [not appearing in this post].

During this same time I was waiting for Kimi to age up to a child. Her birthday announcement came and I tried to age her up but it wouldn’t let me. I was really annoyed and also worried by this. What if she was still a baby when the next kid was born?! That would be bad news! So… I waited.

My patience paid off because Kimi FINALLY aged up! She happened to roll the exact traits and aspirations as Chiyo: a  goofball Whiz Kid. The oldest and youngest sisters (hopefully!) would be old sames. 🙂

She aged up invisible like I’ve had happen before so we went out to the neighborhood and came back in.

She looked pretty weird when I first saw her as a child.

My first thought was, “oh no, squinty eyes are back and it’s affecting girls!”

Thankfully, it was just because she was so happy. She’s actually normal looking. Phew.

Shortly after Kimi aged up Kaori went into labor! Ahhhhhhh!

I sent her to the hospital because I read somewhere that there was a glitch where home births always resulted in multiples.

We can’t be too safe…

AND THEN IT HAPPENED! WE HAD A BOY FINALLY! YESSSS!

I went to double check the spelling of the name ninjapigsims suggested on my last post: Daichi – “grand first son”.

I typed it in and pressed enter.

I actually laughed out loud (LOL’d, if you will). Okay, fine.

I quickly looked for a similar name meaning and picked Eiji: “second son” (according to one name site, correct me if I’m wrong). Appropriate.

I said some swears under my breath (you can insert in “plum, plum, plumming plum” for your imagination).

I took a moment away from the game to breathe and step away. I came back and picked a name that you might think sounds funny but it worked with what I was going for on such short notice: Fuji. (I think it’s cute!)