Aya is talented, Mamoru buffs up, and the family attends their first party.
It’s been a rough week for poor Mamo. He lost both of his parents within minutes of each other and gained two “very sad” moodlets as a result. He and Maddox were best friends and his mom was the prior heir and his mom. He couldn’t even manage to work out without bursting into tears.

My ever-full sim panel was a steady blue, minus Yoshi (who was sleeping at the time) and Sonia (who was at work). The family did a lot of crying in their own beds. I couldn’t tell who was sleeping or crying most of the time.

(While trying to take the above picture my game kept freezing up and I had to quit for the evening. It was a mod, FYI, and so away it went! I was worried for a little while that my game was just too big…)

After a day or so, things started getting back to normal. The family was still blue but they were able to let their “beautiful home” moodlets take over for a while so they could think about something else for a bit. Even Aya’s grandaughter, Cara, came over for a play date and met all her “cousins” (whatever they’re actually called is beyond me).

Oh, and the triplets grew up! I must have been distracted before but here they are. (Oh right, they were doing homework in the last chapter, oops…)

Aya has been trying to complete her musical genius aspiration and she’s doing well. Songs take a really long time to write but she doesn’t mind. It’s nice to get that piano some more use! 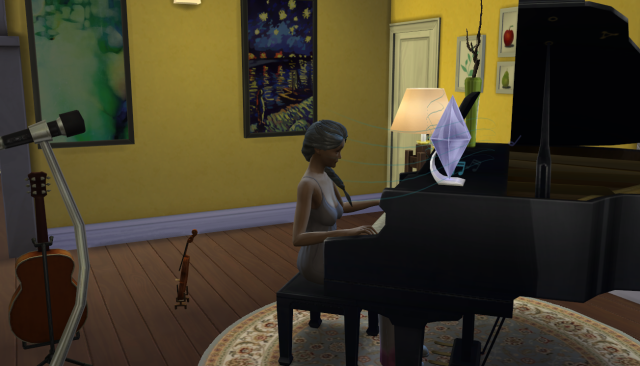 Off topic, but can you believe Sonia still looks so good even after eight children? I can’t even believe her. She doesn’t even work out!

Unlike Mamo who- WHOA! Muscle man! 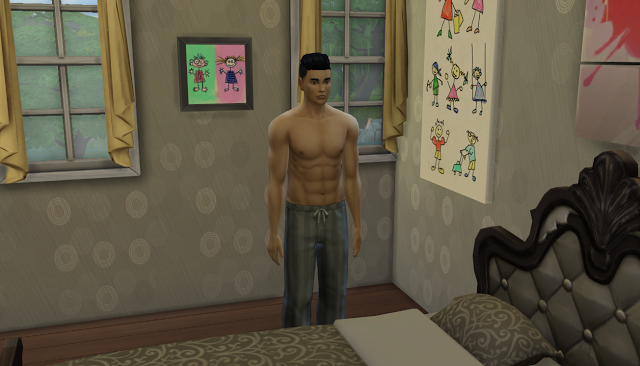 This pretty much happened overnight. I didn’t even notice until he woke up the morning after a pretty hard workout. Way to go, bud. 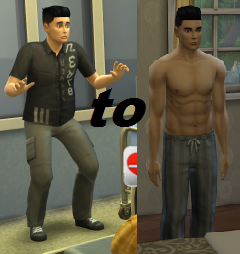 Aya achieved level 10 of piano and, shortly after, finished her fourth song bringing her to the next level of of her aspiration!

She celebrated by mentoring Kaori. Aya also received our game’s first party invitation! She brought the whole house along (the triplets came later) and we got to see another house for a change. The house was Aya’s daughter’s house (the one where Aya would go after her next potion) where Lea, Hugo, and Cara lived. There were a lot of sims already there when the family arrived.

Outside it was lively as well. Mamo’s cousin, Samir, is the one in the sunglasses, and the caterer (who should have been baking a cake…) is in the pool. 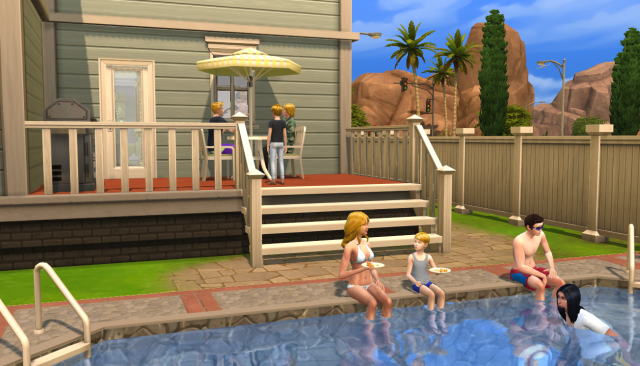 Aya started to make a cake to help her daughter out but realized, too late, that there was already a cake in the oven (no fire? Come on, game!). She finished that cake but by that time it was too late and Lea was suddenly an elder. She still looks good! Well, they weren’t about to waste a perfectly good cake! Asami’s teen birthday had popped up earlier that day so I figured, why risk it? She stepped up to the plate…

Asami added the genius trait to her existing bookworm trait and rolled bodybuilder as her aspiration. Congrats, Sami!