The teens get biz-ay and Mamoru starts his rocket.
AN: This is the last update before the patch!
The next afternoon, Mamo got to work on his homework. Luckily for him, Grandma Dani still likes to pop in and help spread her wisdom from time to time. She was always such a good Sim.

Sonia surprised me early that evening: she called to see if Mamo wanted to hang out at her place. He agreed, of course, and sped over. Sonia lives with five other teens and a caretaker so their house was pretty lively.

While he was there, Mamo and Sonia became best friends!

However, Mamo’s amazing idea to “reveal crush” didn’t go quite the way he planned… Ouch. He didn’t stay too long after that.

With all the attention being given to Mamo, I realized that Nat was just waiting there, trying to pick someone to spend her life with…
The winner of her friend-pool was a blonde guy named Bailey. Cute name; came from the #legacylove tag (so did Sonia, for that matter. Let me tell you a secret: she was a little boy originally but I switched her gender and got a much more interesting looking Sim! Her name used to be Topher. Does that make her transgender? It doesn’t matter because she’s amazing, whoever she is. 🙂 )

They enjoyed a nice dinner together and I just wanted to show you how amazing this guy looks when he eats. It made me so happy, haha! Bailey’s traits are materialistic, music lover, and glutton (oh, looks like he’s a young adult already!)

As for Masumi, she’s getting ready to age into a teen! I’m gonna miss that fun little hat of hers. With Nade’s new job she’s gone in the evening so the rest of the family celebrated Masumi’s birthday without her (tear). They look like they’re doing a good job singing without her, though!

Look at this little chickie! I love her already. Her choice of hairstyle did not disappoint. I don’t know if you can see but this is a custom hair (I think) that has black with red bangs. It fit so well with her personality, in my opinion.

To add to her evil trait she got perfectionist and the aspiration of Painter Extraordinaire.

She got to work immediately.

Mamo, on the other hand, started on his rocket. I’ll be darned if that rocket doesn’t take FOREVER to make progress on.

In his personal life, Mamo and Sonia have finally had some luck in their romance. 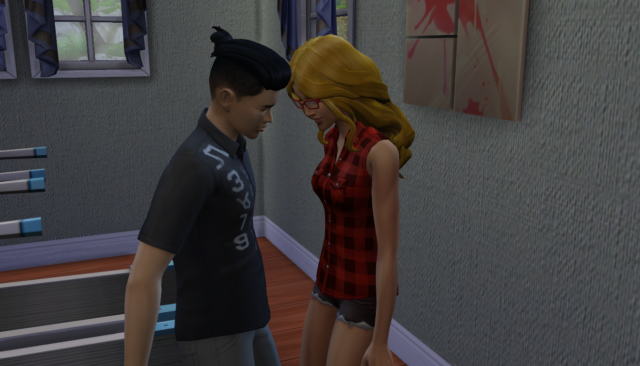 Man, being a legacy heir can be exhausting. 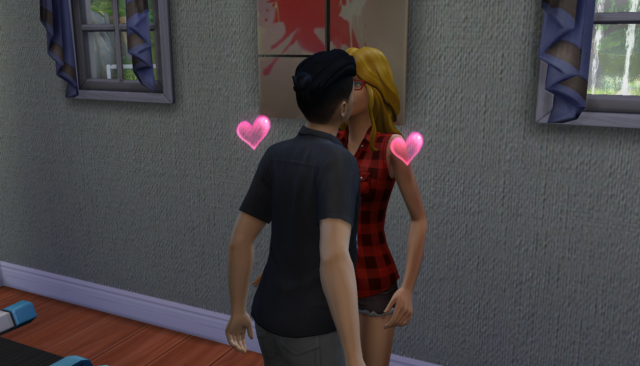