We meet Misaki Ikeda and get a quick rundown of the start of her life.

Note: This was my first time blogging a sims story so as you read through you’ll see how I change and grow. Keep up for a few generations and I promise it will become more enjoyable to read. I think it can be funny at times, too. 🙂

Following Pinstar’s Sims 4 Legacy Rules, I will be playing (Strict) Equality – Living Will – Strictly Traditional. I’m not a big screen-grabber but I will try and post some pictures later of the heirs, at least.
My founder is a young adult named Misaki Ikeda. She is cheerful, clumsy, and a bookworm. She wants to have a big happy family. She joined the entertainer career track and learned violin.

Initially, she had some trouble finding a potential spouse that 1) didn’t make her angry and 2) was not a current resident at any house in the neighborhood. Eventually she found a nice man named Yung Clevenger whom she courted and quickly married. He was already an adult so I knew they had to make the best of their time. He was creative, a glutton, and a perfectionist. He had the typical 20K in the bank and they were able to work up a cute little house. Despite their good fortune, they did run into some money problems along the way due to high bills. They sold their piano, a frivolous purchase, and they were able to make ends meet but just barely. Each time bills were due they had to wait until the final 24 hour mark to make it work.

Shortly after marriage they started popping out kids. Meilin was their first born, becoming a child before younger sister, Minako, joined her. 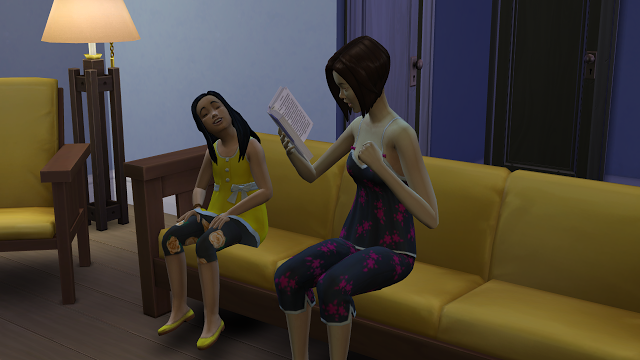 After Minako aged into a child the family had a small amount of peace before Jung aged into an elder and welcomed a baby boy, Takeo. Meilin aged into a teen while Takeo was still a baby.

Not long after Misaki found out she was pregnant with their fourth child, Jung died of old age. Misaki pleaded with the Reaper. He refused to spare Jung. However, an unexpected burden now appeared to the family: the bill situation. Jung’s income was incredibly needed. By selling some items of the family, they were able to make it through another load of bills.

Still, he left behind a teenager, two kids, and one on the way. Or, so he thought.

Misaki gave birth to twin girls, Ami and Naoko, about half a year later. Everyone was exhausted by this point. The babies were always crying and Misaki and Meilin passed out at least once a day. Thankfully, Minako aged up and was able to help out a bit more. Misaki’s friend, Erin, offered to come over almost every day and she even helped a little with the twins.

Finally, they grew into children and the family was able to try and live more comfortably. Takeo aged into a teen during this time as well as Meilin into a young adult. At this time, Misaki realized that she wanted to adopt (it was one of her goals). Unfortunately, the rules state that she could not adopt unless her spouse was still living. Sadly, her lifetime want would not be allowed.

The family again came into some trouble with bills and they made the choice to get rid of their tv to make ends meet. It worked and, lacking television entertainment, they instead played card games, read, and practiced their instruments. The time came for Misaki to age into an elder with Minako aging into a young adult shortly after as well as the twins into teens.

At this time, I decided to evaluate who would be the heir to the Legacy via Living Will. It was a close call between Meilin and Takeo so Meilin began to become closer to her mother, becoming best friends. She even found a boyfriend! They dated for one day. The next day Meilin got a raise! She invited him over to celebrate and to pop the question. Things were really looking up for her! He…declined. She was mortified. He left after that and she went along with her life, hoping for her embarrassment to end. Her prayers would soon be answered and she DIED OF EMBARRASSMENT. Misaki pleaded for her daughter’s life and was refused. As I write this her urn is still in the kitchen where she fell. No one has yet mourned their family member.

The next in line in the Living Will is currently a tie between Takeo and Minako. Bars are full. I’m not sure what will happen or who will pull ahead (or if I’ll even be able to tell!)

Reaper at the lounge!