Little Rigel grows up, we meet a new attendant, and Jana causes some problems…

To Suzu, Rigel’s baby days seemed to go by too quickly. During that time the clan worked hard to save money to build on to the women’s quarters as well as a walkway to the second floor. To accomplish the build, they brought in a new attendant to help and replace Orion.

His name was Atlas Cau and he was well received by the whole clan (and especially the three women). His romantic nature was alluring and Suzu almost wanted to ask him straight away if he would father her heir. She knew she was just attracted to his good looks so, instead, she stepped back to give Tatiana time to befriend him. However, he was still learning about many aspects of his position and Suzu was a little impatient.

“These flowers are wilting! How are we supposed to sell their blossoms if they do not grow?” She said this with a tone of frustration, disregarding the fact that everyone in the clan worked in the garden and not just him. He kindly allowed her to scold him. (AN: Way to be a B, Suzu!)

“I am sorry, Lady. I will try harder from now on…” The addition had two rooms, one for sons and one for daughters. Tatiana, being of a childlike nature, spent a lot of time admiring the toys purchased. She had many thoughts about her own future child and wondered if, just maybe, Atlas would work out for her… Rigel was the first (and currently only) occupant of the boy’s room. In addition to his toys he had requested many books so, of course, books he was given. Suzu had thought quite a bit about how to raise her son as he grew up. She knew that part of her reason for leaving her home village was how neglected she felt during her adolescence. She didn’t want to be hypocritical so she treated him as she thought every child ought to be treated. However, she wondered how long it would take (if at all) for someone from the community council to scold her on her child rearing.

Rigel shared the bathroom with his mother and enjoyed the beautiful tub. He befriended the peacock statue and named it Kotori (“little bird” in Japanese). The statue was not little but it was pretty, nonetheless. Rigel was still a young child and had few responsibilities. Of course, he would be given more chores as he grew. For now he was able to enjoy his childhood within the safety of the compound. Ever since Orion’s departure, Phoenix had been trying his hand at becoming the cook for the clan. He tried very hard but did not always succeed with his cooking. His love life, on the other hand, had much more success… Jana was like an addiction. Phoenix wasn’t always kept in the loop by what happened in their meetings but he knew, by her lack of tattoos, that she had not yet been officially inducted into their clan. Therefore, he knew he probably shouldn’t have spent so much stolen time kissing her… She seemed to have no regards for the rules and did her best to tempt him. On more than one occasion, she had convinced him to sneak into Lady Suzu’s room. As he took care of the cleaning, he made sure it was as if they had never been there… Unbeknownst to Phoenix, Tatiana had seen the couple together in the courtyard one night. She was hurt that she had not been good enough for him and working with him in the garden had become almost painful. His constant cheerfulness got to her easily and she finally lashed out at him one afternoon.

“Listen here, Phoenix. I know your secret…” He stood up to face her, looking worried. “That won’t happen,” he spat. “Mind your own business!” His words shocked Tatiana and she became angry.

“You should be punished! I can’t believe you would speak to me that way!” Tatiana stormed off and went up to her bedroom. Phoenix and Jana’s relationship was forbidden, especially as they did not seek Lady Suzu’s advice and blessing. Telling Lady Suzu seemed too easy and Tatiana knew it would be much worse if Lady Suzu found out on her own. She wondered how much longer they could keep it a secret.

She had to let it go, though, she had her own life to attend to. She met with Lady Suzu to discuss her asking Atlas about her child. Suzu thought it was a wonderful idea and gave her blessing. Tatiana met later that day with Atlas, who immediately agreed. 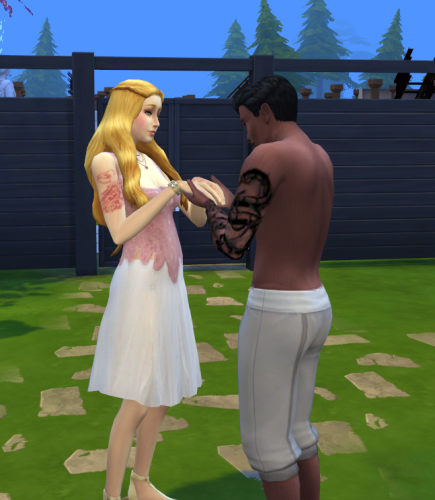 Tatiana was finally going to have her wish for a child and she didn’t need Phoenix’s help at all.