looks at watch How long has it been again? It’s been long enough I forgot the names of our gen 3 heir and spare. Yikes.

Well, here’s where we’re currently at. I moved out the spares that were ready to be moved! At the main homestead we have Pearl (gen 3 heir), Moose, Harry, and Cookie. Over at the Straud mansion we have Ruby (gen 3 spare), Jairo, and Rose. And somewhere else we have Candy and her new boy toy, Tony Stark (looool).

Before we catch up to the present I’ll give a little backstory of how they all got there. Just a little because I don’t have a ton of screenshots, ha. Let’s go back in time a few years to when these guys were still innocent teenagers… 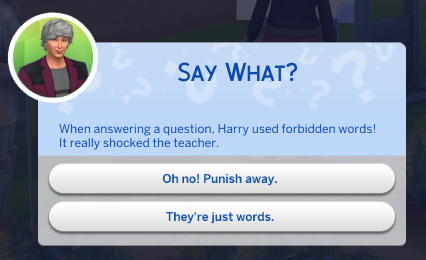 Anyway, they were not teens for much longer and as soon as she graduated Cookie geared up to find a man! All of her hard work on the treadmill really paid off and now she’s lookin’ trim.

As soon as they were ready I sent the girls to visit a new household in town: The Avengers.

Now I know what you’re thinking. “Really, Megs?” But it’s all in good fun! We have to keep things interesting here!

Cookie set her sights on none other than Chris Pratt.

(FYI that’s what he’s called in this household I downloaded from the gallery, LOL. The rest of them are their character names but he’s just going by his actor name. It’s hilarious now that I’m remembering it!!)

Candy, on the other hand, locked on to Tony Stark. He was truly an easy target. Game over, Tony. They moved out together ASAP.

Cutting back home, I had Ruby take her precious vampire daughter out for a meal.

Rose found her prey as fast as she could.

Ruby may not be the best parent out there. Either that or Rose is bold af.

You know who is a good parent, though? Jairo. He loves his daughter soooo much! Who knew creating an offspring could be so rewarding? Now he’ll have someone to stay with him when the love of his life, Ruby, dies of old age. (Yikes.) (Alternatively he could turn her so she can stay with them, too…)

In terms of gameplay I was so relieved when it came time for Rose to age up. Not being able to drink plasma packs was hard!

With that I had Ruby and Jairo get married (I think) and moved them out.

Harry, our current resident bachelor, was aiming for love as well. The lovely Miss Evie Delgato (I think she’s a toddler when you first see her as a premade?) caught his eye.

She is a bit of a firecracker, though. I think she has the erratic trait, possibly? It’s the only reason I can think she went from their first kiss to shouting at the poor guy.

He’ll manage, I think. Tried for baby > asked to be his girlfriend (whoops, I missed a step!) > proposed > eloped > moved out. waving Have a nice life! (Darn, she is so cute!!!)

That next day we received the death notes for both Pearl and Moose. I had them work on their whims a bit. Cookie seemed to know something was up because she also had whims to be around her parents.

I think they lived out their lives to the best of their abilities. When they were done having deep conversations with their daughter, Pearl and Moose were up to their bedroom for some alone time. The risk of overexertion was worth it; if you’re going to die anyway you might as well take risks!

A little while later Cookie was using the stove and started a fire! The alarm went off and her parents went outside to escape the danger. As Cookie extinguished herself the death toll sounded outside.

It was Pearl. Grimmy appeared as snow began to fall outside.

Cookie came out in her toasted state and called her family and friends to let them know what was going on. Her expression makes it look like she’s reporting something, lol. Grimmy stood around for an awfully long time without moving. I thought I might have to do a reset eventually but I figured out why. Moose came outside and the death toll started up again.

Grimm decided to take care of Moose first. IDK why.

“Yeeeeah, someone else died, too. Yeah, I don’t know why this is happening, either.”

While Moose was being reaped, he got a notif that he was freezing to death. Hate to tell you this, game, but he was already dead. Then Cookie got the same notification and she actually looked like an awesome zombie!

After her parents were taken away Cookie and her relatives hung around a bit. Chris came over, also, and Cookie tried to up their relationship bar some more. He was slow going. Eventually everyone left and she was all alone in her big house.

Well, almost alone. She decided to release Killer into the wild. She didn’t want to catch the guinea pig disease. They did have a history together, after all.

NOW she was alone. She needed to start on the next generation ASAP!