What happened here?! I’ve not played this save for a while now and I’m sorry to have kept you waiting! I don’t like to force things and I would have if I didn’t just step away for a bit. These are old shots so I’ll go through with my original plan of throwing information at ya (you’re welcome!)

Let’s show some job progress! Shaurya went towards the charity route rather than politician because he seems like he would want to help people. He’s a nice guy and he knows how much families can struggle and he just wants to help!

Rosie got another promotion, too! She looks so professional in her chef’s uniform, aw.

Eli’s first appearance as a ghost did not go well for her and Chester. Poor guy… No, it’s not great but it’s part of sim life. tear

We’re moving things along here, though! Chop chop! Cake time for both girls (check out that jawline…)

Personally, I love Ruby’s glasses. They both aged up with glasses but I got rid of them on Pearl. They were floating off her face, lol.

For their first day of not-school I had them do their homework together. Shaurya’s parent aspiration requires some super talented kids so I was hoping to get those extra traits up as soon as possibly. Right now I think I have Pearl’s emotional control within range to gain that trait and Ruby will probably get responsible if Pearl fails us.

Here’s just a shot of Rosie in the kitchen. See that open space behind her? We put in a basement! I just wanted to use the extra space, lol. The outside looks like a chimney but it’s not real! Once 3 PM came around Pearl invited Moose over and coerced him into having his birthday a few days early.

For some crazy reason he agreed! How convenient that Rosie already had a cake prepared, huh…

Pearl seems to be pondering if she should be pleased with herself for pining after a child. I mean, she’s not but… >_>;;;

Oh WOW! HOW NICE! He’s like her own personal angel in the flesh!!! (Like the angel from swcheppes’ story, haha!)

Not awful clothing choice… could have been worse. 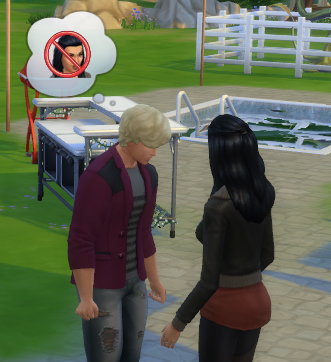 All of Moose’s little siblings ended up aging up on our lot (I had invited the whole group over for funsies). They are all so… interesting (that all orange look is not great, kid). Pearl and Moose talked all evening and stayed long enough for Eli to come out from her grave and bother them.

Then dad, Shaurya, couldn’t help himself and sat down to acquaint himself with his future son-in-law. Pearl is not amused.

She left and mom, Rosie, took her place, scowling at her husband for bothering poor Moose. This legacy is important, man! Don’t scare the boy away! Turns out that he didn’t scare Moose away because he called Pearl to ask her out as soon as he left the lot that evening!

We didn’t accept but invited him over instead and Pearl went to work. 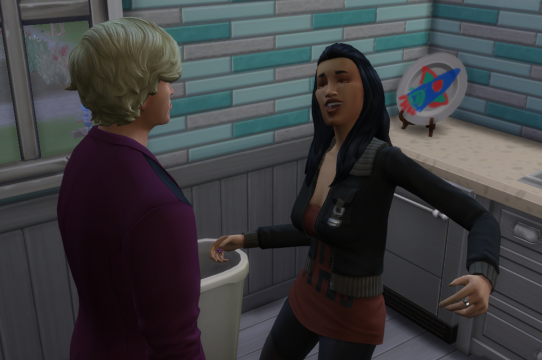 She had to chase him down to get her first kiss in, though. Please note that it was now super early in the morning and Pearl was deffo breaking curfew. Shaurya needed some parenting points so I sent him outside to catch her in the act of standing in front of their house! FOR SHAME. He grounded her from… her phone, I think. Nothing else was really going to affect her so I figured she wouldn’t be able to autonomously play games if she really wanted (she never does).

She said she was bummed but I bet it was one of those really fake sarscastic reactions, like, “oh nooo, what will I do without my phoooone?”

The next morning I realized Rosie needed to work on the garden so she went to work.

To my great surprise she also gained a mixology level at the same time as her plant evolution! I don’t know how she did it but I guess she was practicing mixing in her sleep.

That night I saw this horrific sight:

NO! Not [looks at smudged handwriting] Bongo!
(It’s actually Bozo but I wanted to do the meme so… sorry to break your immersion.)
He didn’t have his cake out, I swear!

The last time I saw him alive on camera was the night before while Shaurya was grounding Pearl:

Lastly, Shaurya got hit on. I don’t remember who this guy is, even. Maybe another maid? He said no in case you were worried.

The heir poll is still open if you’re interested but it looks like our girl, Pearl, is going to be the next heir. Congrats, Pearl! Love your name!