Before we start, here’s the current family tree courtesy of FamilyEcho! I tried PlumTree but I couldn’t get Chester’s girls on it without making it look like Eli was their mom. Then I tried ancestry.com but decided against it as I had to put dates in to make them match up and I didn’t want to do that. So back to FamilyEcho!!!

Here’s a quick shot of their household splash whatever. They are so mismatched! 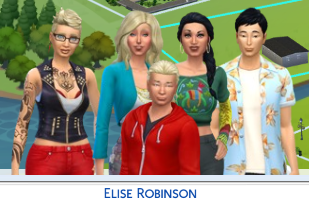 Oh, by the way, the poll was heavily weighted in Rosie’s favor soooo… 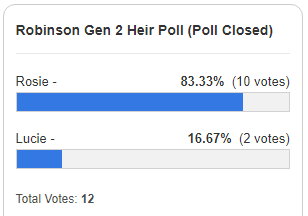 TADA! Rosie is our gen 2 heir! Congrats, darling. Now find a guy and get pregnant!

So the problem with playing on short is that I have missed almost every major milestone that gets a pop up. It’s like… nothing gets the full countdown or something. I feel like I got the notification that the kids were aging up soon in the evening and then they aged up in the morning. I assumed it would be the same time every darned day! It doesn’t make sense.

I’m telling you this because I had them all use their last day of teendom to work on stupid projects. Ugh. As they typically do the day after their birthdays were forgotten, the three triplets moped around the house and did whatever they felt like.

Poor Rosie was still single and friendless (besides her siblings). There weren’t a lot of options in the neighborhood, either. In the collab thread we decided to submit guys for the gene pool. I figured I would send Rosie and Lucie out to take their pick. Andrew would hopefully find someone, too, but he’s an unfortunate afterthought. Damien’s luck, on the other hand, was changing. I recently bought Eli the free services trait and hired a maid because the house was filthy. She was fairly ordinary… until I noticed her name. 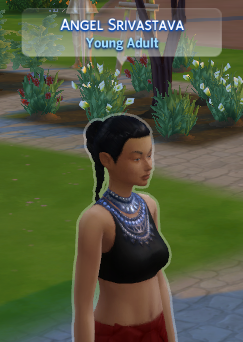 Andrew had spoken to her earlier that day so I had him invite her over after her shift when Damien would be home. I put them to work gaining friendship points… We learned her traits and they were pretty good…

I figured noncommittal could be a problem but I new I could work around it… hopefully. It took all night but the couple were soon ready for their first woohoo… BUT DAMIEN GOT ….BLOCKED! We would need to expand the house… and add another toilet because people were peeing themselves.

The upstairs got a medium sized bedroom with a very small bathroom without a shower. They were still too poor for another double bed so I figured everyone would just sleep wherever they could find. First come first serve as it were.

Over by Armond we have our dragonfruit plant next to our strawberry/snapdragon/dragonfruit plant. (Eli was at work when I took this so we’ll have to see if she can graft our cowplant yet. We’re running out of days for Eli to do it. I might need to get her a youth potion!) Speaking of Eli… She and Moose are getting serious. SERIOUS ENOUGH that I decided to have them become an item the next day and see where things were goi-oh… oh no.

Well SHIT. I knew that would happen. I actually thought that maybe he’d keel over from extreme woohoo or something. Nope.

Wellllll, anyway… back to Damien, I guess. He invited Angel to move in and they finally had their first woohoo. It took ages because people kept going up to the new room and not leaving. I was getting pretty annoyed!

Still, we managed to create a future nooboo! Yes! I’ve forgotten where I mentioned this already (OH on PlumTree!) but poor Damien and Angel would not agree to get engaged! It was always “bad timing”. I promise that, between the two of them, they tried proposing at least ten times. All failures. I guess they’re destined to just be boyfriend and girlfriend. I’ll move them out before the kid is born, hopefully. I don’t like picking traits.

Back to Rosie, our new heir. Chester texted her from beyond to congratulate her on the job!

Oh, right! I didn’t tell you this yet, yikes. She got a job in the culinary field. Andrew took a job in the tech guru field and Lucie took one in the social media field. I think they suit each one of them.

Lucie and Andrew had normal working hours but Rosie and Angel worked nights. Angel, of course, left her maid position in the household so I knew they’d be getting fresh meat.

Here he is! His name is – uh… Shauya or something very close to that. (Sorry! I was going to write it down but the game was super duper slow last night and crashed on me. I was too irritated to go back in so I hope I’m right!) Yah, I know I just said I added a bunch of eligible guys from the thread BUT this guy was right there and time is short! I’ll keep my eyes open but for now he might be our best bet. 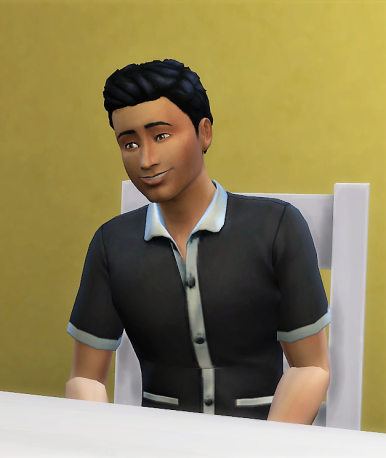 Around this time, Eli came home from work aaaaand spun into elderhood. Great. Then I noticed this sad tidbit… I forgot I pinned this want after Moose left. 😦 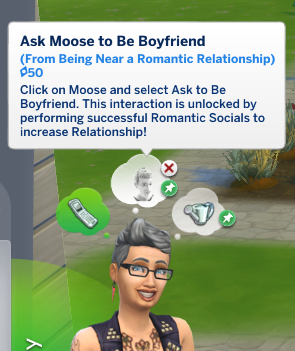 Eli came inside and decided to ruin Rosie’s private time. What better time than now to grill her possible son-in-law? The next day Rosie went to hang out with Shauya by the lake. She talked a lot. He didn’t have a lot to say, though. He just smiled at her. Things aren’t progressing very well with this guy. No flirts or anything. Perhaps we should visit a lot and try and meet some of those new guys…