Aaaaand we’re back! I just started reading a new book (The Handmaid’s Tale) so I’m short a day or two here. No need to fret! I don’t feel like reading tonight (well, not until later!) so I’m ready to wrangle some toddlers!

So… without further ado…

I first thing that happened was that I noticed we had $7,777.00 simoleons in the bank – score! That seems like a lucky number and I bet it’ll be a GREAT day full of skilling and awesomeness! hoping finger crossing

The second thing was an announcement that Aya reached level 5 in communications! She was sleeping at the time so I REALLY don’t know how that happened. Maybe she’s communicating with her “other selves” in alternate saves… The kiddos all slept for a spell (it was 3 AM, after all) before Coty had a freak out and woke all his bunkmates. Thanks, dude. I had him be comforted and sent him back to bed. The kids slept for a while longer

Over in the kitchen, I noticed that Schell had graced us with a new look: this fantastic sweater. In addition to his fashion sense I noticed that he was inspecting the clean counter with a careful eye…and ignoring the STILL dirty counter from the day before. You’re killin’ me, Schell.

With the kids beginning to wake up I decided to have them watch some TV. Aya, ever the trendsetter, asked Schell to turn it on for her.

Oooooooh she is ADORABLE. HELP, I AM SLAIN. Yeah, the rest of them are cute, too…

…but that first shot…

Aaaaaaanywho, those kids watched TV for a good amount of time before it was time to eat! I don’t remember what time it was exactly – time was moving extra slow, in my opinion.

Poor Lori here needed a bath but she stayed dirty for a fairly long time. Greg stared at his food, seemingly contemplating his plate. We’re getting deep in the toddler house. Coty, on the other hand, was in a super sour mood. Was Greg’s appreciation for food troubling to him? Oh, no, he was just grumpy and needed a nap. Been there, kid. (Also, why walk all the way past the bear chair and around the counter to go back to the bear chair? I do not understand.)

Following Coty around the counter made me notice that our maid ACTUALLY CLEANED THE DIRTY COUNTER!!! Meanwhile, Greg decided to cause some more mayhem over by the bookshelf. So much destruction just to find a book about goldfish! 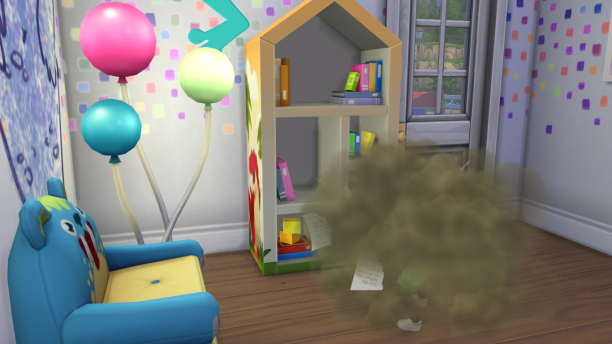 Greg actually sort of stole the show today; now he was studying the bubble wall.

Briella realized that the maid had cleaned the cabinet. Now it was a clean area she could play in! She found a pan. A little later she told the tale to Ryu. He was enraptured, obviously.

Briella getting into the cabinet 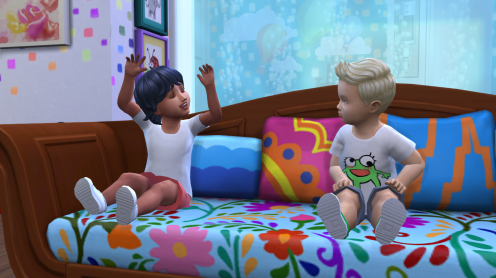 By this time, I decided that I wanted the beds to be blocked off from the main space so into build mode I went! (Now I wonder if I should split the sleeping area into two spaces so only half the kids will wake up to nightmare crying… hm.) Schell took a breather (a pretty long one, if you ask me…) to read some of his butler book! 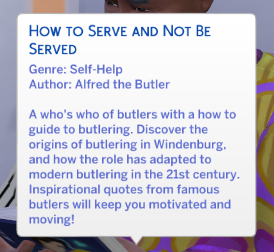 Around this time we had another visitor at the front door. It was Salim visiting all the way from San Myshuno! Megs decided to let him in. (Don’t tell anyone but she’s a sucker for a nice man bun!)

Outside I found Fanny Pack playing with the doll house. I mean, Greg was there, too, but he was less interested than Fanny Pack seemed to be.

I sent most of the kids to bed. Also, I realized it had been a loooong time since Fanny Pack had a break so Megs dismissed him since things would be easy peasy with sleeping children.

With Fanny Pack gone and Joaquin joining us (he asked if he could hang out) we had a dance party! We noticed Takeo Ikeda running by and invited him to dance, too, but he decided not to come in and just visit by the fence. He had quite the moves.

Before coming outside, though, Joaquin chose to talk to Uni about protesting. I hope he didn’t upset poor Uni. I would hope they were on the same page, at least. We don’t need political talk in this house (I get enough of that at work, yikes). We actually get a lot of visitors throughout the day. You’ve seen Eva, the dark haired lady, a few times now. She was at today’s dance party. We needed all the guests we could get!

She was fortunate enough to witness Ryu’s wild child streaking, at least. 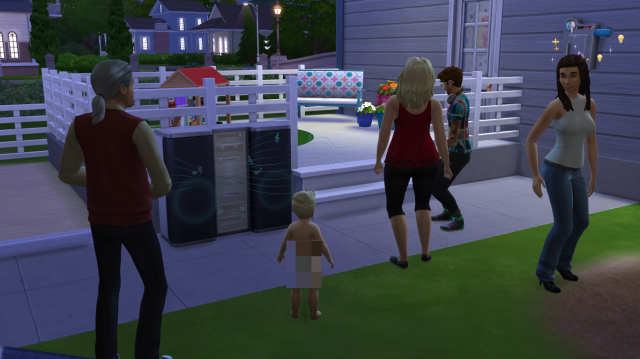 You’ll also notice that Fanny Pack CAME BACK. He was just like “Yo, great to see you guys! What’s it been – like, 2 hours?”

My memory is a tad fuzzy here but I think the kids went back to sleep for a while. When they woke up we had some more food time. Ryu (again with Ryu, he’s our second star of the day) sat on the couch with some food and ate away. His empty plate seemed to cause him some pain. He unleashed it on Luca.

There were no lasting effects so I’m grateful. Some time after this I stopped the day. It was 2 AM or some crazy time.

Can’t lie, I am getting a little tired of this challenge. The routine is repetitive and it took me three days to actually write this entry. I don’t mind writing them but I guess I was distracted with other things going on. (Last night Victoria was on and, come on, it’s precious.)

However… We’re half way through, you guys! WE CAN MAKE IT! WE SHALL PERSIST!