Before we start I wanted to shout out to ninjapigsims who started her own 8 toddler challenge out of excitement!!!! I’m excited to see how it goes for her! 😀

Well, except for Coty. He was still awake and waiting out a nightmare when I saved the other day. These nightmares are possibly the worst part of toddlerdom.

Inside, Fanny Pack is still sitting on Ryu’s bed. He decided that it was the best place to sit and read a book… to himself. Yah, okay. Schell is cooking another strange breakfast – vegetarian chicken saltimbocca. This is the second or third vegetarian meal he’s prepared to us so I’m willing to bet vegetarian is one of his traits. Interesting. 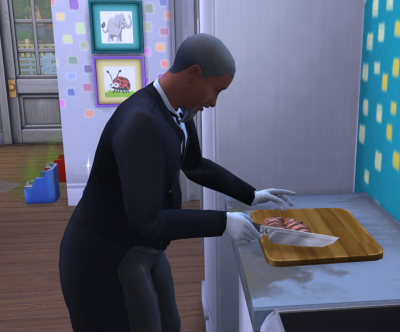 As promised, Megs invited Joaquin over to help entertain the kids and then she went to bed for a while. Lori woke up next; she took care of her important needs first and then invited Joaquin to help teach her how to dance. Neither looked enthused about it but I promise her needs were going up, lol… Back inside (again, lol) we had another little one wake up. Greg took some non-breakfast food and begged attention from both adults that were awake. You’ll also notice the maid standing by the trashcan. Seems all she can do is clear plates. Fanny Pack even helped with that! Honestly…

Lori came back in and went to her buddy the unicorn. Maid is still standing around. After this she said she was all done and left with her $160.00 Thanks, lady. You didn’t even clean off the counter! Heck, Schell won’t even do it! Is this only a job Megs can do? PSH. I’m finally remembering that Lori has a hat

Well, it’s gonna have to wait because Megs got up from her sleep in the bedroom to come down to the chair to… nap. I can relate sometimes, Megs. Especially around 2:30 at my own job. Anyway, despite the shitty maid and a sleepy Megs, day three was going much better than two. The kids woke up at different times and it wasn’t a bombardment. I was helping wake them when needs were yellow, too, so we could get a head start. Niiiice. Fanny Pack talks to Briella while she eats 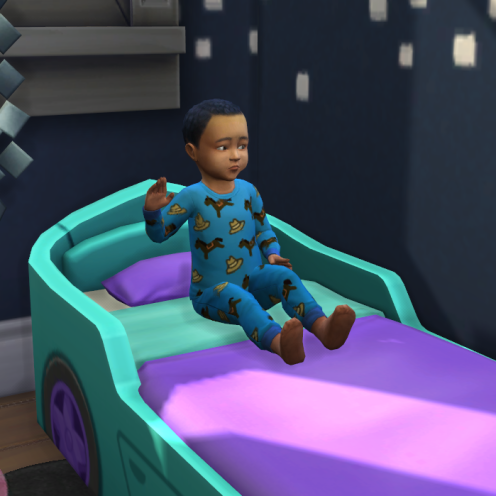 Luca waking up from a nightmare!

I’m even having the great chance to see full green bars for some of the kids! YES. Now we can focus on their whims and gaining skills. Sergio (that’s his name, right?) randomly came over to visit and he was in a sour mood. He went straight to the backyard where Luca was playing and BEAT UP HIS DOLLHOUSE. Schell was standing around talking to Luca when it happened and everyone was APPALLED. 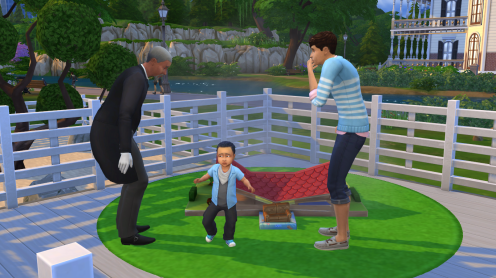 At least we still have the other dollhouse for now, I guess…

More stuff went down, yada yada. Coty and Fanny Pack danced together outside by the castle.

This sweet lady came over around the same time as Sergio and she helped Nina with her dancing also.

Apparently Nina had a plate in her pocket, though, because she suddenly plopped down and started eating in the middle of her dance.

Time for an eating montage! (They have captions so go ahead and hover 🙂 )

Lori (without hat) and Aya enjoying a meal

Ryu, Lori, and Aya on the food couch!

…and now a hygiene montage! 😛

Nina went potty on her own (YASS!)

Ryu being adorable in the bath (ugh!)

At some point between 10 and midnight Megs started towards the front door to randomly be mean to Eliza Pancakes. I cancelled the mean greeting (why, Megs?!) but also went to see what was out there.

Wow! a ton of sims! First we have Takeo Ikeda (Ryu’s grandpa as a young adult), Eliza Pancakes, and Vlad (who was coming to creep into my house!!! WHAT?!). In the back we have Paulo, Marcus (I think), and Geoffrey Landgraab Off topic but what will I do if Megs gets bitten by a vampire? That would definitely throw a wrench into my game…

Eesh… anyway… Back in the yard Fanny Pack was being awesome by fixing the dollhouse! Some of the kids (and Schell, freshly woken from his slumber) decided to end day 3 with a dance party! I say “end the day” but truly it was 2:30 in the morning…

As a gift to the house I decided to buy them all an outdoor movie center! The TV went back into storage so I figured this would be a nice gesture towards them.