We went about two hours without any incident but, low and behold, two lil guys woke up from nightmares at 2:15 AM. I sent them outside because I didn’t want them crying inside and waking everyone up again…

At 3 AM Joaquin called to invite Megs to the Bluffs for a party. Uh, like she has time for that, Joaquin. At 4 AM Fanny Pack called Megs to go to a party at the ruins. Ditto, Fanny.

Thankfully, Schell woke up for some reason and tried to entertain the middle-night boys. Before I could intervene any more Luca asked Schell to give him a bath! Thank goodness for that because he had a huge sad moodlet from being stinky.

After Luca’s bath the boys went to bed and everyone slept until 7. Schell made breakfast (chili, really?) while Megs took a shower. Boring but they’re getting the job done. Yawn.

(Note from the future (it returns!): Why would you JINX yourself like that?!)

Just after 7 Nina got up and made her way towards the kitchen. Shortly after Lori and Briella followed her. 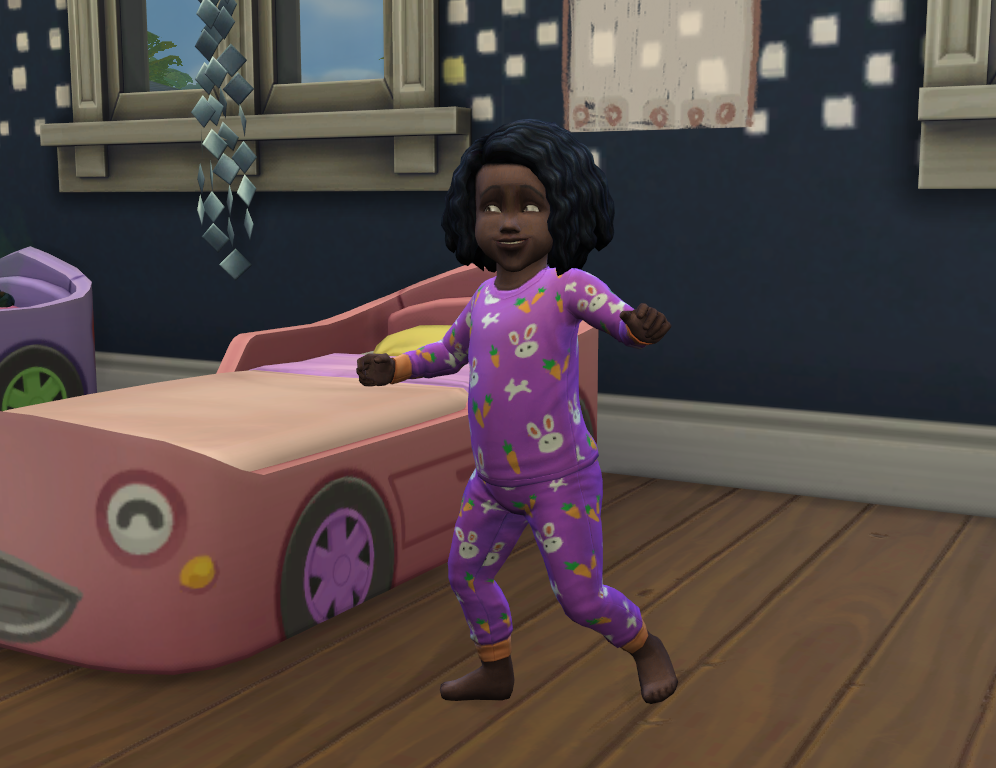 Briella was the most hungry so she didn’t bother to say hello to anyone. Food, go! Nina and Lori decided to chat up Schell a bit. Once they were done Nina grabbed a plate and joined Briella on the couch.

Lori, on the other hand, needed a bath so she went to ask Schell for help. Round two of wake ups started after that and things were… OK.

Aaaaaaand then I spoke too soon and things started going downhill. I called Fanny Pack.

It was getting a little hectic. Everyone had low attention bars, or they were hungry, or they needed a bath… FANNY PACK, WHERE ARE YOU?! HE WAS FOUR FREAKING HOURS LATE. Why…

Back outside Ryu was angry about something so we had our first toy casualty.

And then we had our first pass out: Nina. This was the first of two for her that night, actually. The second time she was actually in bed and then got out, toddled all the way outside to the backyard, and passed out by the castle. Things were rough. To my relief, though, we only had one notice that someone was hungry so I guess it could have been much worse.

This picture was taken at 3 AM… I sent Megs to bed right after this so at least one adult would be functioning in the (later) morning.

Then I attempted to get all the kids to bed. As long as they weren’t hungry or dirty away they went. It’s now 6 AM. We’ll have some damage control to do once they’re a bit more rested… Hopefully we can have a better day three…

But before we go, let’s see how they’re progressing with their skills. Communication is the highest for 7/8 of the kids.

Everything else is a mess, ugh. I don’t even know; I can’t concentrate, haha!

Relationship-wise, Megs has green with all the kids EXCEPT for Nina. They must have had a fight while Megs was trying to get Nina’s attention bar up… Whoops. Megs is closest with Coty.

They all seem to like Fanny Pack more than Megs and Schell (ugh!). ALL of them seem to have red with Bob Pancakes. He was part of the welcome wagon we rejected so that may have something to do with it.

For day three I think I’ll invite Joaquin over and see if he can help out a bit with attention… Wish me luck!