The triplets age to teens, everyone gets sick, and there’s lots of kissing.

I worked really hard to help Tatsuya meet his first aspiration goal. Conveniently, he stayed home from school with a cold and talked to Aya all day. I thought that he’d have enough time to become her best friend but later that evening the triplets decided to age up. Nooooo…

Following Tatsuya’s illness I started seeing it a lot more in the household. Sami stayed home from school the next day with a fever. Kaori, already a young adult, tried to keep her sister company before she took her first of many naps of the day. 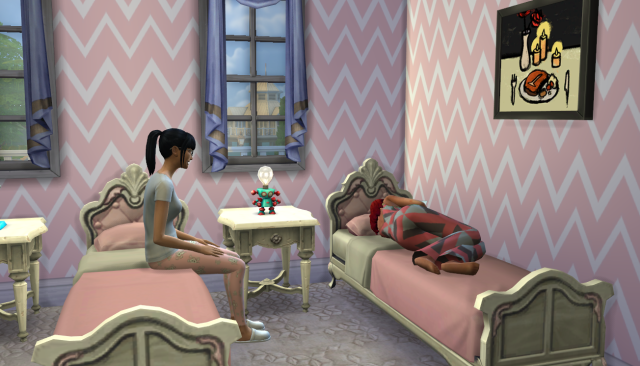 Still, Sami felt well enough to make Yoshi a cake for his young adult birthday later in the morning. Aya and the triplets also stayed home with him so they had a small gathering to celebrate. His final traits ended up being materialistic, active, and bookworm. 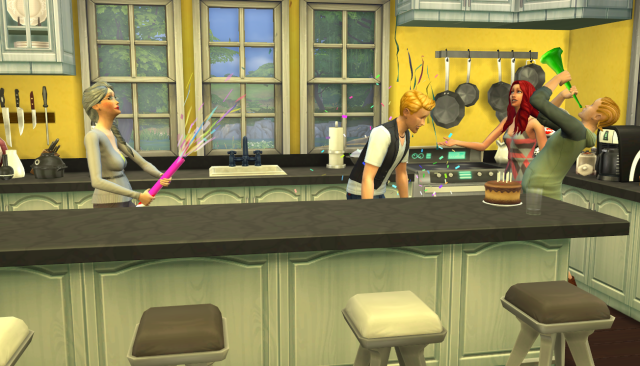 He also invited Traci over to hang out with the family.

It didn’t take long for them to become an item. We’ll see how their relationship progressed later. 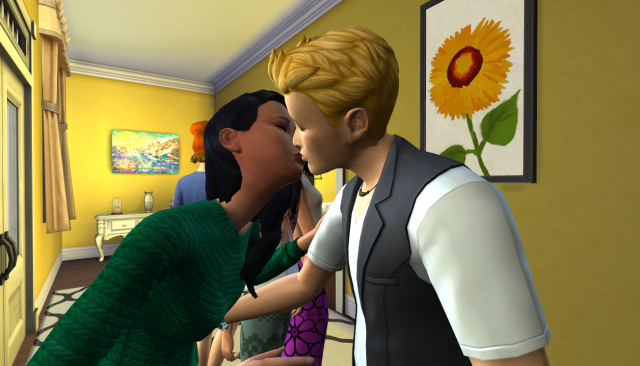 Speaking of progress, Kaori and Malik are also doing well for themselves! His traits are a pretty nice match for Kaori’s: bookworm, bro, and goofball. Hers are lazy, genius, and childish. Her childish nature and his goofball nature will make for a nice team, I think.

Now that Kaori was pretty much covered, I moved on to help Sami with her aspiration. She needed to work out at the gym so I sent a bunch of the family over. While there, she and Mamo got to talking quite a bit and it moved their relationship bar a fair amount.

The next afternoon when Mamo came home from work Sami greeted him with a big hug. She had reason to, though, because he was promoted to astronaut! Way to go, Mamo! 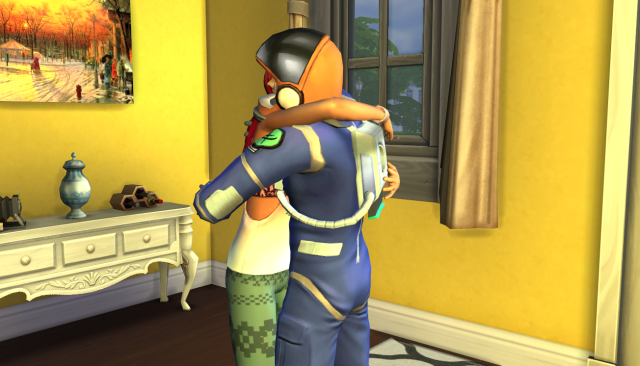 Right after that it came time for him to age into a buff silver-haired hunk! (He’s seriously so huge. His formalwear looks so weird on him!) I’m a little worried about his future in the astronaut career because the daily requirement is a workout and, even as a healthy elder, he’s not safe from the triangle warning of doom. After a while, I noticed that Kaori and Malik had a pretty high relationship on all fronts so I encouraged her to make a big decision… 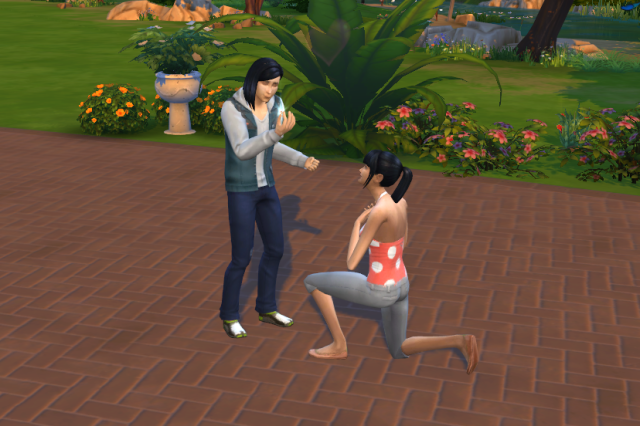 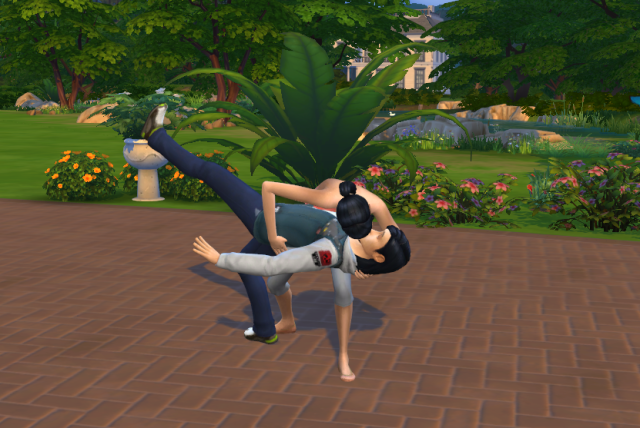 The two lovebirds were so happy that Malik decided to join the full house before they got married. I was actually thinking of throwing a big wedding for once! I’m really a fan of this couple and I am rooting for Kaori to become the heir.

Once Sami hit young adult (and rolled evil, for goodness sake!), she and Kendrick really hit it off. They’re just good together. Kendrick is a glutton and Sami loves to bake so I don’t see how things could be better for the two of them. Also, Sami is the only person Kendrick has chosen to “share melancholy thoughts” with (since he’s a gloomy sim). 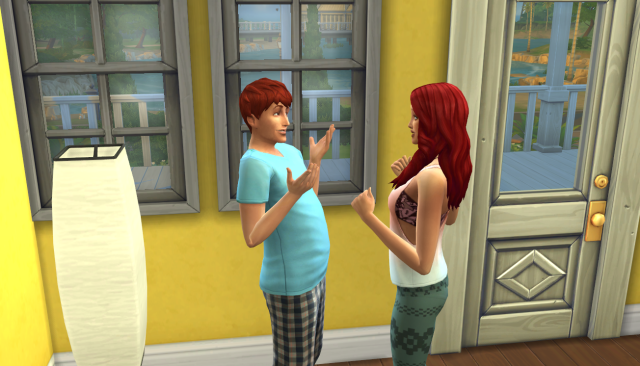 (AN: regarding the evil trait, it was funny because as the website was loading the results I was thinking, “huh, it’s cool that Sami has one good trait from each parent: bookworm and genius. Oh, but Sonia and Mamo have mean and hot-headed as traits, too… I hope that doesn’t mean-” Yeah. That’s exactly what happened.)

As for our youngest daughter, Momo, she hasn’t really been interested in anyone. She saw this fellow walking around behind the house and decided to chat with him. His name is Cecil; he’s okay. She’s sort of indifferent, actually. They’re both creative. He’s also materialistic and she wants to be fabulously wealthy so that’s good. He’s evil but she’s always scowling (I seriously don’t know why!) so that works somewhat? Anyway, I’m really pulling for him (just because she’s probably not going to become heir) but they’re not making it easy for me.

I decided to move him in anyway, just to see if being around each other more would help. He’s on the older side of young adult so, worst (best?) case scenario, I could move them out to a pretty house and pretend she married him for money (which, let’s be honest, she probably would). Ah…

OH! ONE MORE THING! When I moved Cecil in he had an aspiration goal of mansion baron (which we completed several generations ago) and he completed an entire aspiration without doing a darn thing! Hooray! Because of that, I decided to let Aya have a go at it, adding yet another trait. She became the first sim of mine to become “the most interesting sim in the world” with twelve traits! (She did buy several of them but that’s besides the point!) 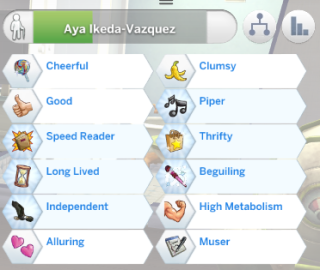 So talented, my Aya! 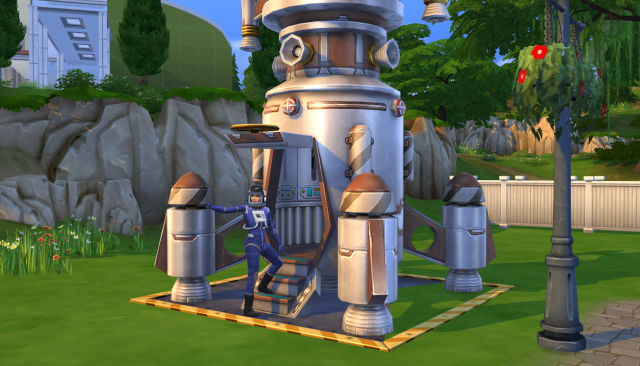