Michiru becomes a painting wizard, Tachi changes his ways, and Hiro turns bad (sort of).
Michiru finally did it! She reached her aspiration of Painter Extraordinaire! She also reached level 10 in the painting skill. She’s just about to reach the top of her career, too. For her next aspiration she chose Mansion Baron. I don’t know how she’s going to get 30 columns. That might not happen… As for Tachi, he had to make a choice about Dani and his aspiration.
He invited Aubrey (the red head he met as a teenager) over to his place to talk. It took a while but he asked her to be his girlfriend then IMMEDIATELY broke up with her just like he did with Annabeth.

Harsh world. Well, someone else seemed pretty happy about this… Hiro aged into a young adult and had his eyes set on Aubrey. In the couple of times she had come over they learned that she had the evil trait. Did I ever tell you the rest of Hiro’s traits? WELL.

He sounds like he was born to be a villain in a comic book.

Oh right, Aubrey. She came by every day after Tachi broke up with her so Hiro made his move. He didn’t mind that she was older than he was. Whatever. It took him a few days but he finally got her to warm up to him. 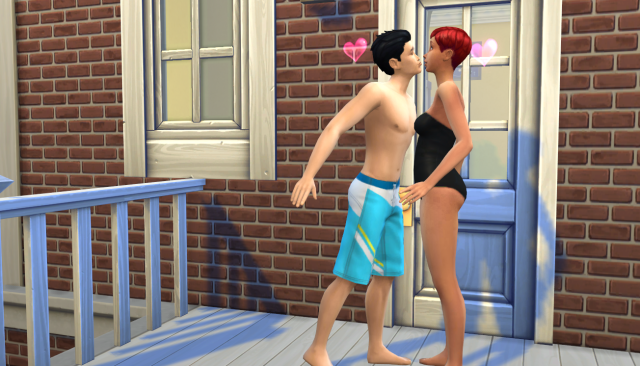 He changed his look a little, got a job as a criminal ring leader, and proposed to Aubrey. She accepted and they eloped right there. They moved out to one of the big beautiful houses in Oasis Springs.

He was actually third in the heir pool and I just wanted to see them have a beautiful house with a questionable lifestyle. So there.

Now with Aubrey out of the way, Tachi was free to see Dani again. It had been a while since they last saw each other so he was looking forward to going out with her and earning some medals!

Hm, she put on a little weight. She wasn’t super small before but no big deal. Tachi doesn’t judge.

As the evening went on, however, Tachi started putting two and two together. RUDE, TACHI. You never ask a lady that.

She was cool about it and he got to touch her belly. I guess he’s not questioning things. Maybe she was seeing someone else. Did that occur to you, genius? No. He knew there was a reason he didn’t want to break up with her…